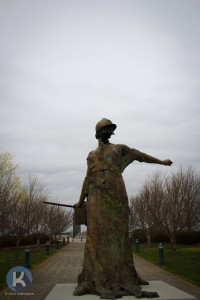 Reproduction of a French sculpture of a classical Nike commemorating the dead of World War One, and the peace they died to secure. The statue was damaged by American artillery in World War Two, a mere two decades later. It now serves as a haunting reminder of the fragility of peace.